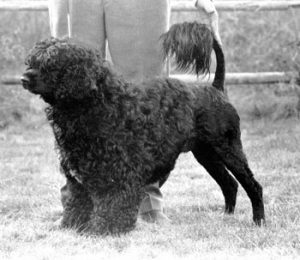 Dexter was born in 1996 and lived to age 13. He was a very outgoing, charismatic and active boy. He lived with Ginnie and Bob Santoli where he had a successful show career as well as competed in many performance events. Read more about this handsome boy and take a look at some cool pictures of Dexter throughout his life.

I’m thrilled to be able to go back in time and utilize some of these old genes! I’m excited to see what this pedigree will bring. This breeding was accomplished using semen collected and frozen 16 years ago. Thanks to Dr. Rebecca Kestle and the staff at Cliftwood Animal Hospital in Atlanta for their part in the success of this breeding. 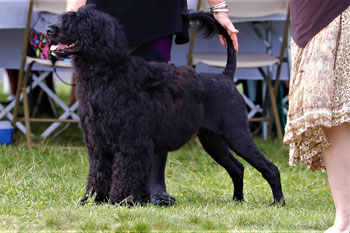 It could be said Fable is the happiest dog on earth. She loves to make new friends…human and canine…and is FULL of energy! Fable is 21” tall and weighs 55 pounds. She loves the water….just try to keep her out of the pool. Makes no difference to her — summer or winter– she’s gonna find a way to get wet. Her love of water has earned her nickname of “Fable the Fish”.

Fable hit the show ring in fall of 2016 and her first championship points were a 5-point major from the Bred-by-Exhibitor class. She picked up her 2nd major on the Florida circuit in January 2017. After a short break to have some beautiful pups in April of 2017, she popped back into a weekend of shows picking up a few more points. A few weeks later we headed off for her first showing at the PWDCA National specialty where she won a very competitive Bred-by-Exhibitor class of 17 beautiful bitches. In November of 2017 she was awarded two more major point wins to finish her AKC championship with 4 majors!

All black wavies with bits of white. 4 boys and 4 girls.
View Pedigree

Yesterday was the epitome of the perfect fall day, if [...]

TipSea and the pool cover puddle!

There's nothing that can keep this little fish from the [...]

Countdown to arrival of the Peeps Pups has begun! Quick [...]