Peeps Pups have arrived! 8 little pups arrived late on Monday April 2, 2018. All are doing well and  mom Fable is doing her usual spectacular job taking care of them. Their birth weights ranged from 17.5 to 11.5 ounces.  All black with little to no white markings on them as I’d expected. There is an even split of 4 males and 4 females in the litters.  Meet Marsha and her brother Mallow, along with the rest of the gang – Chickie, Cotton (Candy), Ghost, Beanie, Bunny, and Sugar 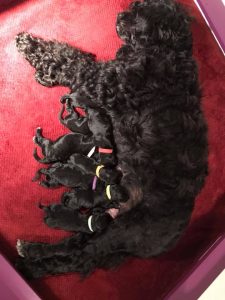 All pups are eating well and have been busy putting on the ounces since Monday night. Fable is a patient and devoted mom, spending almost all her time in their whelping box allowing them to nurse.  So far they’ve received their first pedicures…128 little toenails trimmed! It’s important to keep their little nails trimmed to make life easier for their mom. Those little front paws are working it while they are nursing and you don’t want Fable to have 64 sharp little nails scratching while they nurse! Their nails grown like crazy, so this will be a weekly or twice weekly chore.